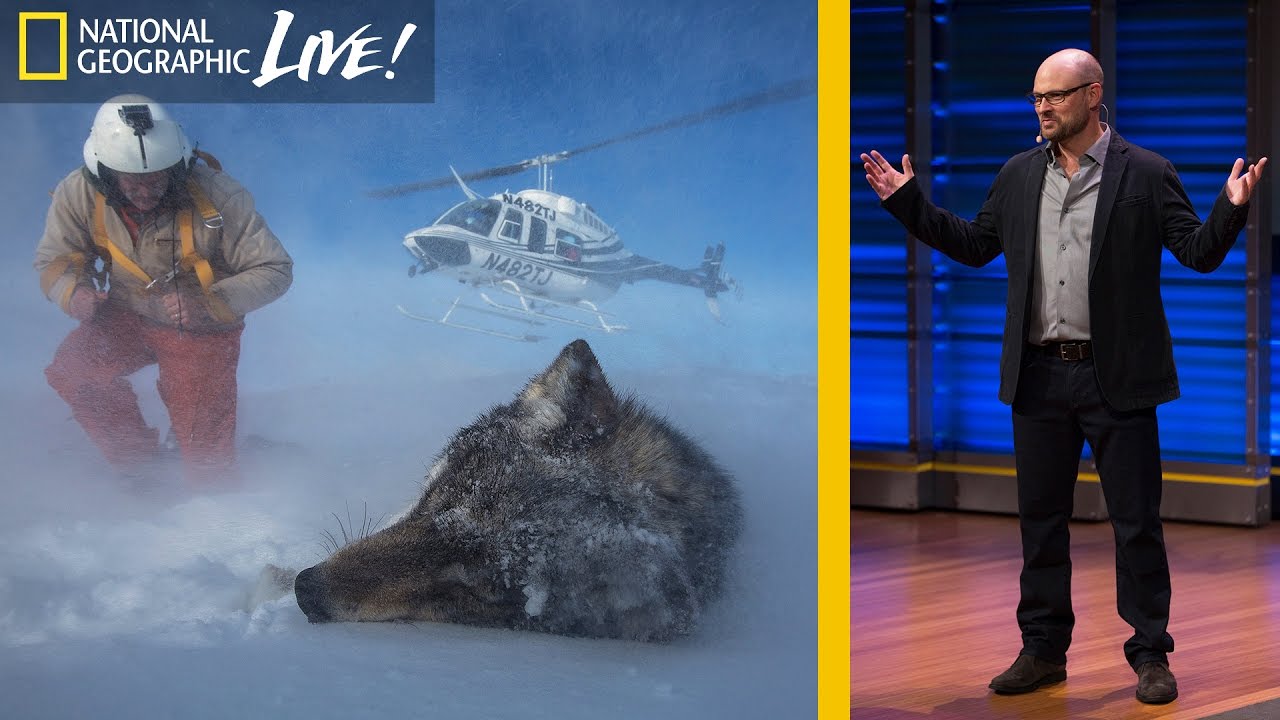 I could have never imaginedthat I would be standing on the streets of a placelike Pyongyang, North Korea and 20 years later I cameback to the United States with my cameras and it's beenevery bit as mind blowing.

They had a single topicissue this summer.

There were manydecorated NationalGeographic photographers out there but the rest ofthem were inside the park showing the landscapes, the wild life, the biology, the tourists, the gloryof our public land.

My job was to standoutside the boundaries of Yellowstone NationalPark because NatGeo knew it was just as importantto tell the story of the people who live onthe other side of the line and what it means to liveadjacent to a national park.

On my first day I drove throughYellowstone National Park this is what I saw.

So I lived my lifeoutside of the boundaries of the park.

In the bars where I atedinner, on main streets.

I started my own newInstagram series, I called this one Work Commute.

Work Commute wasn't onlyto make all of the editors jealous that they weresitting in an office all day and this is where I was working.

It was also that ideathat we could take people out into the field.

That a National Geographic storylasts for an entire year so why not bringpeople along with you.

(laughter) but what National Geographicreally wanted me to do in Yellowstone was tackle issues and mainly they wanted meto look at the conflict and confluence betweenpeople and wildlife.

Bison have had a very darkhistory in our country.

We once had 50 maybe60 million of them roaming North America.

We killed them downto just a handful but it was also the moment when human beingslooked after animals and the conservationmovement was born and they brought themback from extinction and now the core DNA.

American Bisonthat we have today live inside Pelican Valleyin Yellowstone National Park but they only have room forfour, maybe 5000 of them and every year they comeout and cross the line and wander into our yardsand into our highways.

The bison was named ournational mammal this year and yet in thewest in many places it's still registeredas livestock.

Can you imagine thebald eagle as livestock, kept in a chicken coop? They're not that lovedactually by a lot of people in the west because of.

The proximity thatthey live to the parks.

Who couldn't love this guy? He was being- this is aYellowstone bison, he was being tagged and tested for a diseasecalled Brucellosis.

Many people don't love bison because they fear this disease and that they will transferthis disease to their cattle once they crossoutside of Yellowstone and this bison tested positiveand this is how they dealt with it.

So they're lookingfor solutions, how to manage bison, how to deal with them how to protect them but also live with them.

And one of the solutions isNative American hunting rights as the bison crossover into our land outside of public land, they give a certain numberof hunting licenses to the native peoples.

I had the privilege ofgoing with these men and watching them asthey hunted this bison and ceremoniously removingits heart in a field and they've starteda new program too where they instead of killingthem they round them up put them in thesetrucks and ship them off to the NativeAmerica Reservations because native peopleshave a direct connection to the bison.

When this truck arrived inFort Belknap in the north of Montana they let out school, all the kids came, all the elders came and people celebratedas they let them go and let them loseon their land again.

It's probably the animalthat's maybe the pulse of Yellowstone.

It's what the bearsand the wolves eat.

It's also what brings inmillions of tourists every year.

These beautiful animalsthat you can see them practically no other place.

But again outside of the line people see them avery different way.

There's almost a cult of hunting and it's big business too.

So I tried to goright on the line that separates the parkfrom the rest of the state.

This line rightbehind the hunter, that's the actual boundaryof Yellowstone National Park and the hunters come here, putthemselves right on the line and wait for elk tocome up over the hill.

The elk know where thatline is, it's amazing.

When they cross it'slike they just saunter in home free but when they don'tlike this one on the right, the hunter shot him, hestood up, he struggled, trying to get to the lineand he shot him again, he slid right to theline and the hunter said, “It's a good thing he didn'tmake it to the other side “cause we wouldn't have beenable to retrieve him legally.

” This is not a hunter, thisis a biologist darting a wolf for research purposes.

Wolves were reintroducedinto Yellowstone in the mid-1990s because they didn't believe that the ecosystemcould be healthy without an alphapredator like the wolf and they're lovedinside the park.

Tourists name them, theywatch them with remote cameras from laptops in their homes, they have tattoos ontheir arms of wolves and when they see themthrough a spotting scope they break down in tears.

It's quite amazing butagain outside of the park it's a different story.

Ranchers fear them becausethey come onto their property, they eat their livestock and actually they just seethem in many ways as demons, the big bad wolf.

And these are not peoplewho are used to doing things any other way than settlingthem in their own way.

They told me, “we're usedto living with wolves now and we know thatthey're here to stay but we don't like thefederal government telling us what to do.

They used to justsend these sheep up into national forestland and let them graze for the season all alone but now they go with them, theysleep every night out there with the sheep andI did this too.

I followed them allthe way to the top of the Gravelly Mountains.

Grizzlies have been protectedas an endangered species for something like 40 years and maybe as a signof their recovery the numbers are greater, they're coming further down into lower lands, they'rebecoming a bit more habituated.

Now we find them in thefront lawns eating apples out of our apple trees.

This is Dusty, he's a bear trapper for the state of Montana.

He goes around, he educates people how to protect their garbage and how to protect bearsby not allowing them to become habituated but he also gets his 911 calls, “Hey there's a bearon my roof again.

” and they go and they dartthem and they bring them back to the garage and they sometimes euthanize them if thebear becomes too difficult to deal with but usually like thisbear, they tag their ear, they brush their teeth, they give them inoculations and then they drive them fromWyoming to the Montana border and they let them goon the other side.

And the bear catchers inMontana told me the same thing.

They bring them intoWyoming, open the door, let em go into Wyoming.

This man's name is Nick Patrick.

He's a rancher from Wyoming.

One day he was walking inhis yard with his dogs, his dogs start barkingand they ran off into the willow trees.

He thought maybe theywere chasing a raccoon so he walked in behind them, he didn't have his bear spray and he found himselfsuddenly caught between a huge sow grizzlybear and her two cubs.

Before he could do anything, the grizzly was on him.

He said with one swipe ittook off his entire face.

He fell to the ground, itmauled him, he played dead, she let him go.

As she was walking awayhe reached into his pocket to see if he had something to protect himself, she turned and saw him.

She was on him again, she mauled him, dragged him by his leg.

She let him live.

He walked back from thewillow trees into his barn and he found a shop ragand he covered his face so that he could goand tell his wife and his children thathe'd been injured.

He didn't want them to seewhat had happened to him.

And he walked in thehouse and told them to, “Take me to the hospital.

” When we firststarted this project we wanted to photograph Nickbecause Nick tells that story of living with wildbetter than anyone else but he said he didn't wantto be photographed then because he hadn't had thereconstructive surgery that you see in this picture.

” because Nick believes thatwe have to live with the wild and Nick says that, “Thatmother was doing what any mother “would do, protecther children.

This was the centennial of thecreation of the park service.

Every issue had a storyabout a national park and I tried to go toas many as I could too now that I was back in America.

I took my children, wewent to the Badlands, we went to the Evergladesand I hung around with these invasivepython hunters and I went to Yosemite.

I got to go with PresidentObama to Yosemite National Park.

He was there on fathers'day to tour the park with his family but alsoto announce even more land and seas that he and ourgovernment decided to protect.

With that announcementhe solidified his legacy as the best presidentthat we've ever had for conservation, protectingmore land and seas than any other before him.

I got the chance to walkthrough the forest with him.

Just me and acouple of cameramen and at the end heshook our hands and I thanked him and he said, “Hey, aren't you the guywho took all those pictures in North Korea?” (laughter) I said “Yes, ” and I said”What did you think?” and he said, “It's good, I think it was important “we got to see somethingwe don't normally see.

” and he started to walkaway and he turned around and he said, “Hey, justbe careful over there, “I don't want to haveto come over there “and rescue you andbring you back home.

” (laughter) but I made it home, exactly 20 years from the time that I left.

It was actually 4thof July the first day that I came back.

I went to my sister's house, she had a 4th of July party.

Now that I'm home, Iguess I kind of often feel like a strangerin a strange land after being away for so long and so I notice and Iphotograph the things that maybe outsiderswould notice.

All the patriotism and the flags and the sugary diet that we have and maybe I'm a little critical but I also know thatmy sister made these and so I also feel love and I also feel likeI'm happy to be home again.

This is my front yardwhere I moved back to.

This is the frozen lake outsideof the house I'm living in.

Those are my footstepsgoing out onto the lake and back to my yard.

I had to go quite farout into the world for a long time to feel like I could answer that voice in my head andthat I could find my purpose and that I could bringthat purpose back intact and that I could notice allthe little bits of beauty right here in my own countryand in my own back yard.

And so maybe for mostof you, you didn't have to quite go so far.

You knew that from the beginning but for me I hadto go a long way before I could come back home.

So I want to end by justthanking National Geographic because theybrought me back home and they're stillsending me out there into the wild sothank you very much.