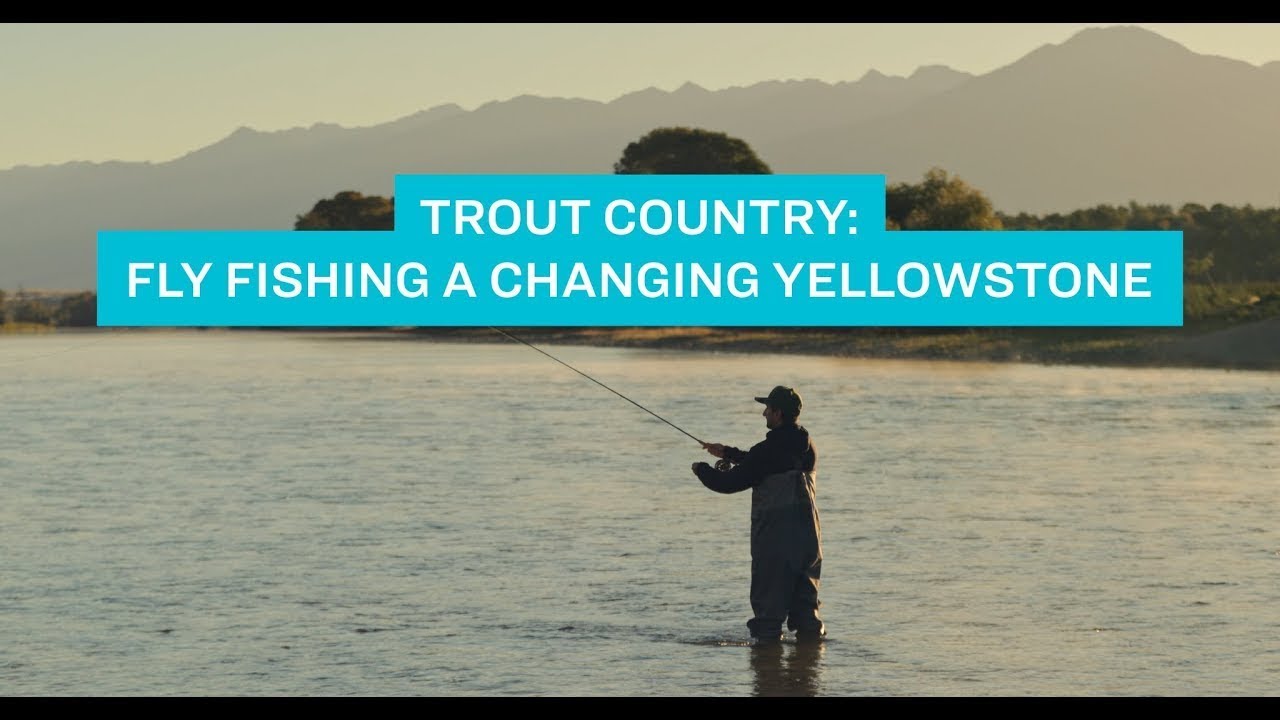 I can remember catchingfish with a fly rod.

But I really got into itwhen I was 10 years old.

My dad bought me a Russ Peak rod.

And I took that rod upto the Big Hole River and fished with my dadon a salmon fly hatch, and from then on I was, it was something, was more than just a passion.

It was something I wantedto do all the time.

I grew up fishing for cutthroat, and there's just something special about catching a Yellowstone cutthroat.

They're beautiful, but whenyou catch one in this area you feel very lucky to be here.

– It's a sport that I think if you spend some time doingit there's so much to learn.

– Maybe you should point out the eagle that perched up in its tree still.

Sometimes you can havereally unproductive fishing and you make one change of the fly, you change the kind ofwater you're fishing in, and suddenly you gofrom nothing to suddenly you're catching fish consistently.

And for me that's, even when I was 13 and really impatient, that was still a lot of the fun of it, was the fact that I think Ireally figured something out of what was going on under the water.

And that to me is endlessly fascinating.

– Our summers have been getting warmer our water is not as plentiful.

As a result we've got these rivers that are classic blueribbon cold water fisheries that the fish are under stresswhen it comes to August.

Now we find a lot of those trout fisheries transitioning into smallmouth bass fisheries.

So you've got these warm water fish that are starting to move up the drainage because the water is just warmer.

And so that's a change, smallmouth are great fish to catch but that's not reallywhat Montana's known for, especially not Montana'straditionally cold water fisheries.

– Other changes in terms of things that certainly I ascribe to climate change.

One of the things we've seen is changes in the way that runoff happens.

I used to manage oneof the local fly shops and handled most of theguide bookings for the shop and I think back on whatI tried to characterize when people would say, “What's the best time tocome to Livingston to fish?” The things that I toldthose people 25 years ago would not be the same thingI'd be telling them today.

(friendly music) – The whole tourism economy is driven since the movie came out in 1993, called A River Runs Through It.

it's been a huge incomemaker for the state.

A lot of businesses depend on that river and Paradise Valley to make a living.

We're about 54 milesnorth of Yellowstone Park and Livingston along witha couple of other towns, we consider ourselves to bethe gateway of Yellowstone.

Well, this river is thebackbone of this area it doesn't matter whetheryou're in the tourism industry or the ranching industry, or you run a small businessdown in downtown Livingston.

We all depend on this river because that's what bring people here.

And it's also what sustainsus while we live here.

You cannot overstate theimportance of Yellowstone River and the cold clean water to this area, regardless of what industry you're in.

– I've been guiding and livingin this area since 2012.

Yellowstone is an area I fish a lot.

It's a national park with a lot of depth.

So this is Mill Creek andit's a little drainage that comes out of theAbsaroka Mountains here tributary to the Yellowstone.

Not exactly a trophy fish but you can see the orange slash underneath its gill.

What I like about fishing is, not necessarily catching themost fish or the biggest fish, it's catching them how youwant to catch them and where.

And it's soothing to the soul.

As cliche and ridiculous as it is, it's like you can get out and go and have this peaceful experience and there's not much like it for me.

So in 2016, that was anextremely low snowpack year.

We started seeing whitefishdying off in the river.

– The things we know now, certainly we don't know all the answers but at least we know what the pathogen was that caused the fish kill.

We do know that warm water temperatures are at least one of thecontributing factors that led to the outbreak, and I think we're stilltrying to figure out, a couple years laterexactly why it happened.

– Low water, high temperatures they're a function of each other.

000 whitefish deadon the side of the river is a huge deal.

I mean it's an unprecedentedthing on this river.

It's a fish kill that'snever happened anywhere close in that capacity in this state.

– You start to see someof those fish which a lot of people may feel like may be the canary in the coal mine so to speak.

It was very clear very quickly that we could be undergoinga huge fish kill.

– When you were floating down the river and you saw a number of deadfish on one side of the boat and dead fish on the other side, you knew it wasn't business as usual.

– [Dan] So the governor, and Iwas fully supportive of this, decided to close down theentire Yellowstone River from Gardner to Laurel toall recreational activities.

– Drastic measures are beingtaken in Montana tonight to stop a deadly invader that'skilling thousands of fish.

Officials have shut down nearly 200 miles of the popular Yellowstone river.

– It was eye opening for sure.

Put a lot of stress on the communities.

Gardner is a big rafting community, nobody could put a boat in the water, so that town shut down.

– [Brian] We came up with anumber trying to do surveys to figure out what the local effect was.

And that the river closure of 2016 was something like halfa million dollar hit to the local economy.

– Kind of emotional about because it was a big deal closing the water.

Never in my life time of fishing, that's a first.

It was a big wake-up call.

– When we had the fish kill and everybody was sitting in the town hall and pointing fingers andyelling and screaming.

Just sitting there going, No one's really bringingany data to the table so that we can maybe stop pointing fingers where fingers don't deserve to be pointed, and start looking at the data and go, “what does this mean?” We are at Reedfly Farm, right on the banks ofthe Yellowstone River in southwest Montana, maybe 30 miles north ofYellowstone National Park.

I just walk down in the evening, I watch for the hatch and then I fish this stretchof the river constantly.

From the evidence I've seenon climate change in Montana, in this particular area, there's this trend for same amount of precipitationbut less snowpack.

So in the hotter portion of the season when you have lower flowsand hotter temperatures, of course you're going to havea change to the river system.

You've got water comingin and water going out.

The water comes in through precipitation: it could be rainfall, and it could be snowpack that's melting, it can also be groundwater release, that's the inputs.

Then it gets used, right? It either flows through the system or it goes down into theground water and into the table or plants are using itor people are using it.

As you get hotter summers, if you have the sameamount of precipitation; rain plus snowpack.

and that snowpack melts sooner you don't have as much base-flow of water later in the season.

What it's gonna create we don't know.

We didn't think it was goingto create an algae bloom that resulted in parasitesthat then killed fish.

I mean everybody wasjust waiting around for low-flow and hot water to kill the fish.

That's what's kinda scary about it is the complexity of whatthis climate change can do at a micro level.

– That is something we shouldbe paying attention to.

When 10, 000 dead whitefishthat need cold water, that need abundant water, when they're dying like that.

We gotta make some changes.

– So this is the one we'reputting right down here in the river.

– Well, you can't expectthe government to hire a bunch of people tomonitor a whole water shed.

Let's get the fly-fishing guys.

Let's get the local land owners.

Let's get the schools involved.

We gather the data within 24hours we publish it online and people can go look at it.

That's the concept of RiverNET.

– We like to call it communityscience because it does take a village (laughs) to raise a trout.

– RiverNET is stemming from a call from local folks here in thevalley for better information about the things that aregoing on in their river.

And so we became involvedas kind of the scientists to provide that scientific background.

So this is one of ourin-stream data loggers.

And then Rick, right now, he's able to downloadthe data via Bluetooth right on to his phone.

– Water temperature is veryimportant for bug hatches and time of day to be out on the water.

So I can get a sensor like this, come and take a reading from time to time and really have an idea of what the water temperatureis doing at what time of day.

– The product of this data set, as people are anticipatingthe effects of climate change and trying to find a way torespond to it themselves, having high quality, long term, high resolution data will benefit that decisionmaking by letting them not only know what changes have occurred but also be able to predictwhat changes might occur.

If we get too caught up on fighting about why climate change is happening, we lose valuable years to figure out how we go about mitigatingthe impact of climate change.

And that's something Ithink we really need to do.

– I think a lot of people my age when we sort of saw theissue of climate change come on the horizon, I think a lot of us thought, well our kids and grandkidswill have to deal with that but that's somethingthat's way down the road, we don't need to worry about it.

And it's been prettyshocking to a lot of us to just take stock and look around and realize that thingshave changed a lot.

So certainly, as an outfitter and guide, one thing's that's importantfor us to be able to do is to adapt to the changesthat are coming along.

So if we rise beyond a certain point, imagine 70 degrees, we better start liking small mouth bass, 'cause trout will go away.

And that would be in my opinion, criminal.

Because it's one of the prettiest fish that you can catch in fresh water.

There isn't anything aboutthis that speaks of bass.

I don't know where inthe world you have bass and elk, bear, even wolves.

This is a trout environment.

This is a mountainous trout environment that we all need to work on protecting to ensure future generationshave the same opportunity to enjoy what I enjoy.